According to the US Energy Information Administration (EIA), the US power grid consists of more than 7,300 power plants, nearly 160,000 miles of high-voltage power lines, and millions of low-voltage power lines and distribution transformers, which connect 145 million customers. However, the US market for electricity is trifurcated and is in transition, often leading to the power outage, which, in turn, is expected to supplement the demand for generator sets in the country. Although, the majority of the demand for generators came from the household segment in 2017; the commercial and industrial sectors are projected to witness higher growth rate than the residential segment during the forecast period, 2018 - 2023. However, on the flip side, the increasing deployment of renewable sources of power generation, including the feed-in-tariffs given by the government, is expected to act as a restraining factor for the growth of the electric generators market.

Factors, such as frequent hurricanes and thunderstorms, cause disruption to the well-established, but aging electricity transmission network, in the country. While there exist backup generation facilities, they are not sufficient to fulfill the energy requirement of the technological super power. In such a scenario, the usage of electric generators is necessary, without which, the loss incurred is often in multi-billion dollars. Electrical power outages, surges, and spikes are estimated to cost more than USD 150 billion in annual damages to the US economy. The power outages in the recent years have drastically increased in the United States, owing to the aging power grid infrastructure. In 2016, approximately 18 million people were affected by 3,879 power outages lasting over 48 minutes  on average, with California topping the list of states in the United States. Generators’ demand is expected to increase during the forecast period, to manage grid efficiency and ensure that electricity supply is in a constant balance with the power demand. 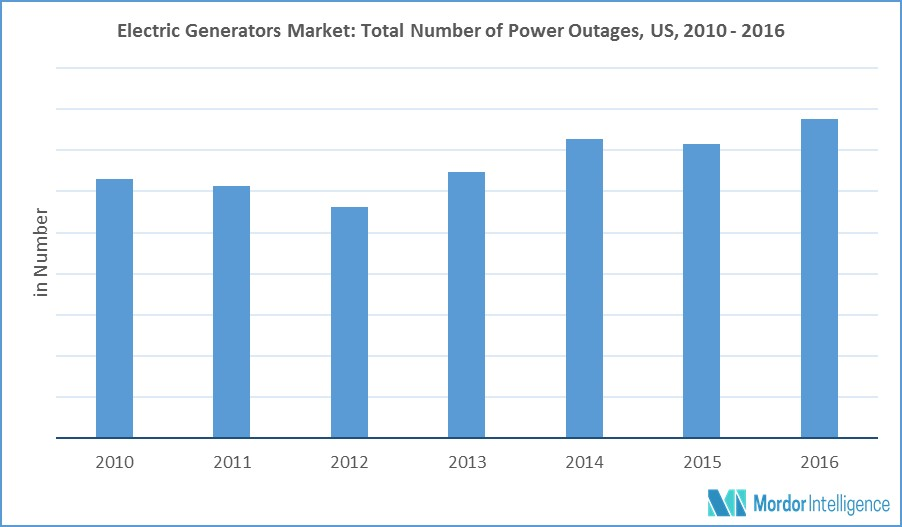 Notable Developments in the Market

(*List of companies is not exhaustive. Please let us know if you are interested in any company profile)

(**Subject to availability on public domain)