Russia light vehicle market is recovering with a steady pace after being negatively impacted by economic crisis till 2016. The decline in oil prices and the sanctions imposed on the country by the western nations hampered the growth of automotive industry in Russia. Consequently, the government hadn’t been able to attract FDI in the country due to complex geopolitical situations. The market witnessed an exponential sales downturn of 1.4 million units in 2015 from 3.1 million units in 2012.

The economic recovery and government programs have brightened the industry in 2017. The government made a major legislative reform in the policies by providing a breakthrough to the Public Private Partnership (PPP) mode of investments in the infrastructure sector. The country is about to host FIFA World Cup for which, Russia released a whooping budget for the construction of sports infrastructure and for transport improvement, which includes fleet renewal, and public transport. Hence, this is anticipated to boost the market of cars and light commercial vehicles. For instance, the sales of light vehicles registered a growth of 20.5% in the first quarter of 2018. 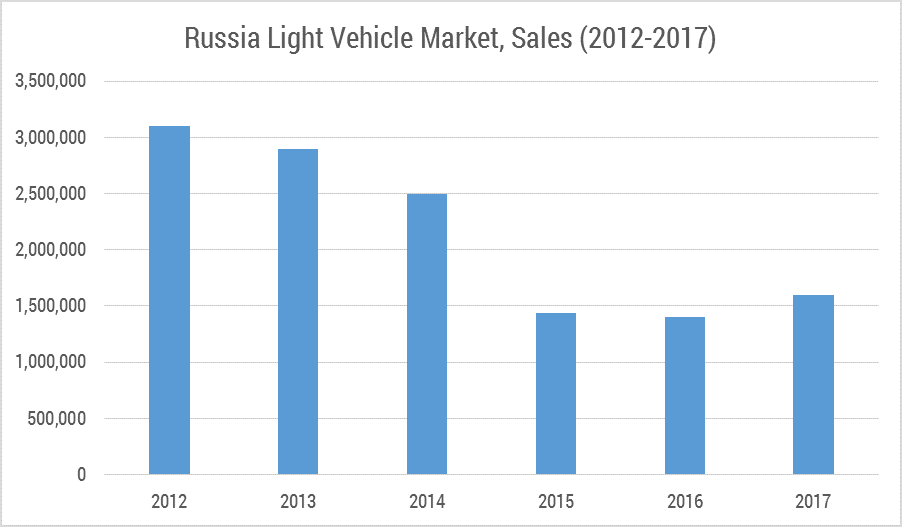 The leader of the market in light commercial vehicle segment GAZ group has been dominating the market with ~44% of market share. GAZ has sold 47,798 vehicles in 2017 with a growth of 14% from 2016. GAZelle Next was the best-selling truck model in 2017 with 25,779 units followed by UAZ 3909. GAZ group plans to increase the sales and production of the light commercial vehicle by 10% to meet the demand for the FIFA World Cup. But the production and export operations of the GAZ group remain in doubt after US imposed sanctions against its owner Oleg Deripaska, who is one of the seven businessman targeted by the US government. It is anticipated that these sanctions could also affect the trade between GAZ group and other countries.

Reasons to Purchase this Report:

This report can be customized to meet the desired requirements. Please connect with our analyst, who will ensure that you get a report that suits your needs