The GCC is India’s largest regional-bloc trading partner, which accounted for USD 104 billion of trade in 2017–18, nearly a 7 % increase from USD 97 billion from the previous year. This is higher than both India–ASEAN trade (USD 81 billion) and India–EU trade (USD 102 billion) in 2017-18. Two of India’s top five trading partners, the UAE and Saudi Arabia, are from the Gulf. The GCC also provided over USD 37 billion in foreign-exchange remittances from Indian expatriates in 2017, accounting for over 54% of India’s total. But, there is still no India–GCC Free Trade Agreement, although a framework agreement on economic cooperation was signed in August 2004. Notably, India and the UAE have recently embarked on an ambitious drive to upgrade their bilateral relations. GCC and India aim to increase bilateral trade by 60% over the next five years and have set a target of USD 75 billion for UAE investments into India’s infrastructure development, spanning ports, airports, highways and construction, as well as petrochemical projects. The growing trade and increasing demand from local and international markets has allowed the development of free zone warehouses in the GCC region. The government in GCC region are optimistic that the increasing free zone warehouse infrastructure and competitive process will further boost the markets growth.

In January, 2018 DP World’s Jebel Ali Free Zone (Jafza) opened the UAE’s first green storage and warehouse facilities in Dubai, helping business to reduce their carbon footprint. While some cool storage facilities are now running entirely on solar energy, an increasing number of other Jafza warehouses will become more energy efficient as DP World’s Solar Programme is rolled out over the coming years. In February 2018, Kommerling started using Solvochem’s JAFZA warehouse for GCC expansion and drumming facility in Jebel Ali, where they stock and distribute the Cilbond grades. The company aimed to work with any organizations that are bonding rubber and polyurethane to different substrates, including producers of rollers, bridge bearings, anti-vibration parts, and industrial tank linings.

KIZAD, the integrated trade, logistics, industrial free zone of Abu Dhabi, is driving this economic growth by developing an ecosystem with best-in-class connectivity and efficiencies. Strengthening KIZAD’s value proposition for warehousing and logistics companies is its proximity to Khalifa Port, one of the fastest-growing ports in the world and Abu Dhabi’s strategic gateway to trade along China’s Belt and Road maritime route. To further enhance KIZAD’s strategic advantage in the logistics sector, KIZAD Logistics City, launched earlier in 2018, offers industrial zone and free zone warehouses, which cater to trading, export, and third-party logistics companies, as well as freight forwarders and distributors. In addition to the newly-launched free zone warehouses and LIUs, KIZAD Logistics City’s products also include industrial zone warehouses with a net leasable area of 119,000 sqm.

In April, 2018 Al-Futtaim Logistics, a leading integrated logistics and supply chain solutions provider, has announced the expansion of its services with the opening of a state-of-the-art cold storage warehousing facility in Dubai. Located at Jebel Ali South Free Zone, the multi-temperature facility has space for more than 1,600 pallets with full temperature control ranging from +18°C to -22°C. The facility incorporates world-class warehouse management technology including capturing all the attributes of the products combined with double-deep storage, which optimizes space and enables high throughput. The new facility has been designed for piece and pallet picking for speed-to-market orders.

Qatar is currently developing two free zones spanning 35mn square meters, said the Minister of Economy and Commerce Sheikh Ahmed bin Jassim bin Mohamed al-Thani. He noted investors can choose between operating their projects in free zones or directly accessing local markets. Qatar-Bulgaria bilateral trade had reached USD 24million in 2017. Qatar has established four new logistics areas that have contributed to reducing the cost of warehousing and bolstering the supply chain. The free trade zone warehousing market already has strong presence of not only government but international and major local players. Due to strong competition in the region free zone warehousing is expected to further grow.

Ecommerce is changing the distribution and logistics market. The consumer expectation and demand as increased due to the e-commerce business model.  As a result, smartphone penetration here is greater than 65% and more than two-thirds of the population uses the internet, with penetration in the UAE, Bahrain, and Qatar exceeding 90%. Moreover, the proportion of mobile traffic is increasing year by year. The UAE’s USD 27 billion e-commerce market and the Kingdom of Saudi Arabia’s USD 22 billion market, will be the two largest markets dominating the region by 2020. Souq is the region’s biggest players with over 15% market share. With over 75 million visits per month from 12 million unique visitors, Souq offers more than 2.3 million products across 31 categories hosting more than 17,000 merchants in the marketplace. In 2017, Amazon acquired the company marking its move into the region. The team has grown from five employees to more than 3,000, while the platform gets 1.5 million visits a day. In 2017, the Dubai government announced the launch of the Dubai CommerCity, the 2.1 million square feet area that will be entirely dedicated to e-commerce in the Gulf. Governments, in fact, recognized online shopping as a huge opportunity for the economy and led incentives, such as the Saudi Vision 2030, which is fostering private economic growth creating a region made of major consumer countries as well as great distribution centers. 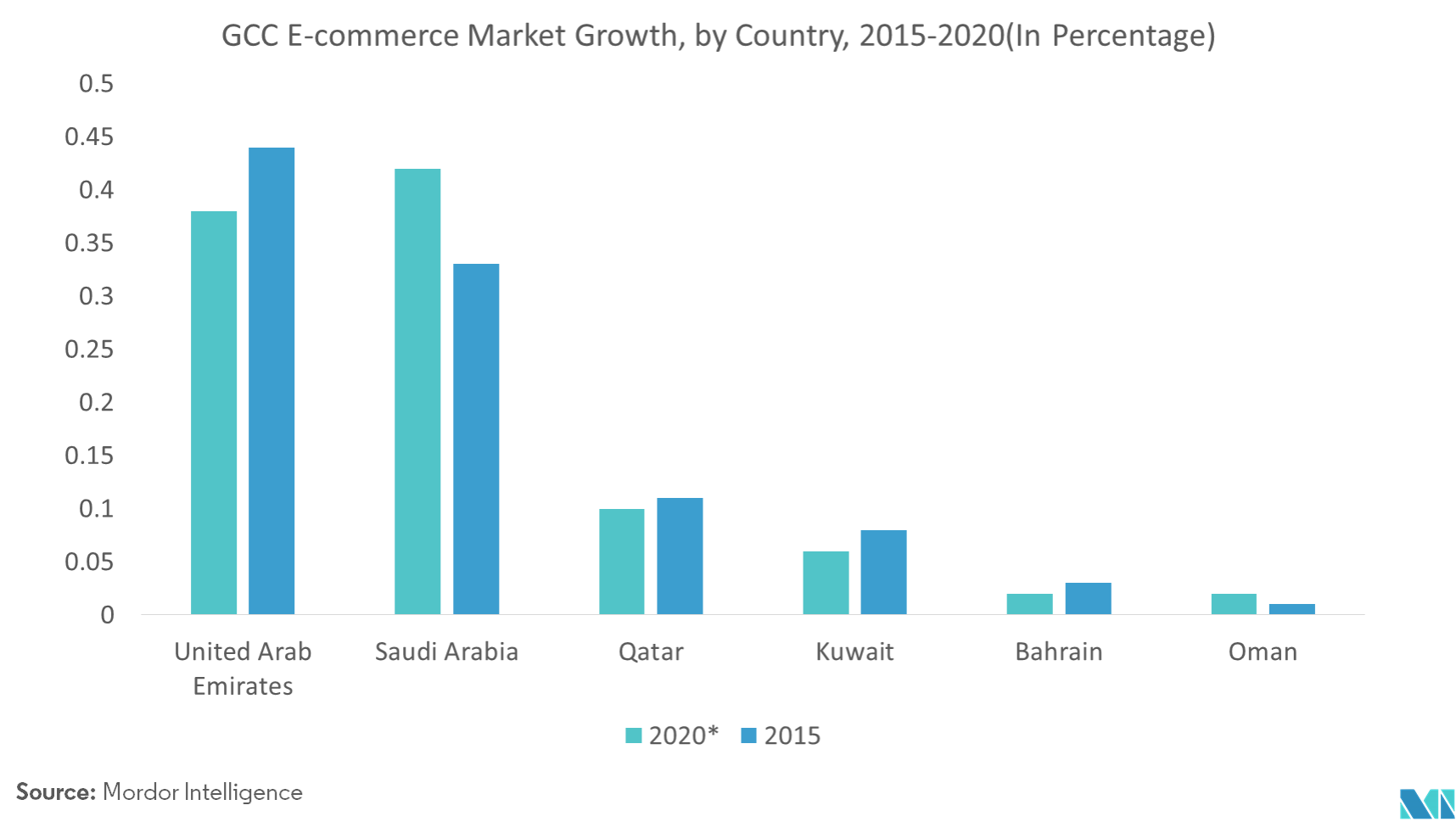 With its strategic geographic location, the Middle East is one of the ideal places for companies to start businesses. The region also has state-of-the art infrastructure and a world-class business environment, providing investors with a unique and comprehensive value added platform. The region is the ideal base for companies targeting markets in Central Asia, the Middle East, Africa, the Asian subcontinent, and the Eastern Mediterranean. Being a strategic hub for international trade and commerce between the East and West, the rising exports and imports are driving the supply chain and logistics market in the Middle East. The transportation and logistics (T&L) industry is one of the key sectors for the economic growth of  the region.  As countries in the region pursue political transformation and economic diversification, transportation and logistics investments are increasingly becoming the cornerstone for its future growth. Leading local and global manufacturers have started setting up their regional headquarters and distribution facilities in MENA region. This, in turn, has led to rise in the demand for setting up of companies specializing in logistics, transportation, freight handling, warehousing, packaging and supply chain management in the region to meet the growing demand.