The automobile industry is one of the most significant revenue-generating sectors in Japan. Cars are a significant contributor to greenhouse gas emissions (GHG), globally, and road transportation contributes 18% of the total CO2 emissions in Japan. As a result, the shift toward alternative technologies, like electric vehicles (EV) to reduce car CO2 emissions, has become an integral part of the climate change challenge. The Japanese market for EVs is the most mature market in the world, with the highest number of EVs in Asia. As of 2016, Japan has the third-largest fleet of electric vehicles in the world, after the United States and China. Since 2009, the country has sold more than 150,000 electric cars. Japan was among the first countries committed to develop the EV market, over the past two decades. The nation had introduced the Green Vehicle Purchasing Promotion Measure in 2009, under which, the government offered tax deductions and exemptions to encourage early adopters to choose electric vehicles over traditional vehicles. The government has also provided incentives for electric vehicle owners, as well as invested in the development of a charging infrastructure across the country. 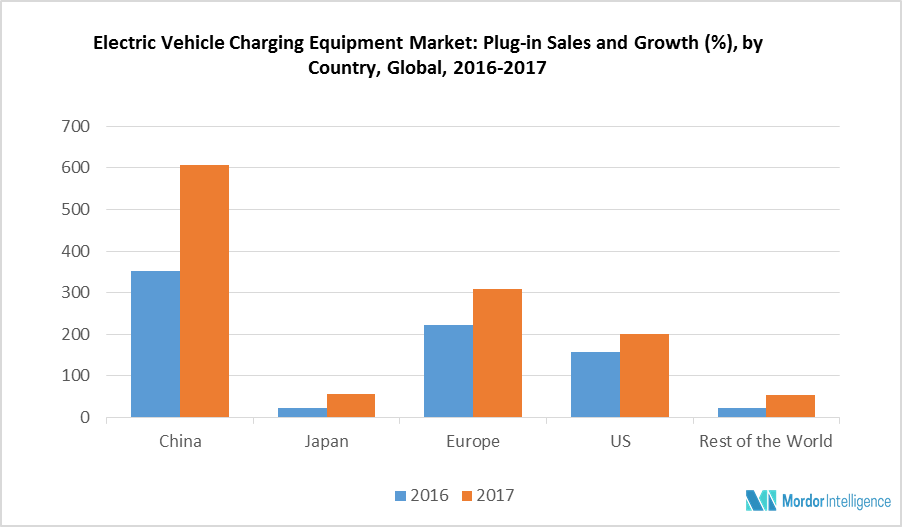 In 2013, the Japanese government announced a deal with auto industry leaders, Nissan, Honda, and Mitsubishi, to invest nearly USD 1.025 billion for building user-friendly electric vehicle charging infrastructure in key locations across the country. The partnership witnessed about 800% increase in the number of EV chargers nationwide, from 4,700 chargers in 2013 to 40,000 charging points in 2016. During the same year, the number of electric car charge points in Japan overtook the number of petrol stations, that is, 40,000 charging points in Japan as compared to 34,000 petrol stations.

Based on connector type, the electric vehicle charging equipment is segmented as CHAdeMO, SAE Combo CCS, Tesla Supercharger, SAE J1772, and IEC 62196. CHAdeMO is a DC quick charging method, in which the car and charging stations use CHAdeMO connector and protocol to assure that battery is charged with optimal current. These types of chargers are installed mostly by local municipalities, car manufacturers, and companies operating highways in Japan. The country aims to install 5,000 CHAdeMO chargers by 2020. In order to support 1 million EVs in Japan, about 5,000 to 10,000 fast chargers need to be installed over the next few years.

Introduction of Government Subsidies - Beneficial for the Market

The Japanese government plans to reduce its carbon footprint through the use of EVs, which has resulted in substantial investments toward the EV infrastructure development. Japan witnessed an increase in the number of EV charging stations, to support the rising number of EVs, on account of the introduction of government subsidies for EV buyers. Additionally, the decrease in the cost of EVs in Japan, as compared to other markets, had further paved the way for the increase in EV adoption and accelerated the development of EV charging infrastructure. The rise in the usage of EVs in Japan has increased the number of stations along highways. Moreover, the government is focusing on supporting the use of EVs for long distances as well as seek more advanced EV charging solutions to shorten the duration for fully charging EVs.

The Japanese government has introduced specific initiatives to accelerate the introduction of charging infrastructure. In 2016, a new subsidy scheme was introduced in the country that grants progressively higher subsidies as the electric range of the model increases, with the maximum subsidy set at JPY 8,50,000 (approximately USD 7,700). For a Nissan Leaf with a 30-kWh battery, the purchase incentive comes to be around JPY 3,30,000 (almost USD 3,000). According to the Japan Revitalization Strategy revised in 2015, the government aims to achieve 50%-70% share of vehicle sales through next-generation vehicles by 2030.