A typical air separation unit (ASU) divides the atmospheric air into three pure gaseous components, namely nitrogen (N2), oxygen (O2). and argon (Ar). Moreover, the unit separates other rare inert gases (krypton, xenon, helium, and neon) through the cryogenic rectification of air. The growing demand for industrial and specialty gases in the oil & gas industry, along with the increased purity level of gases, owing to the technological advancements in distillation and filtration capabilities, is expected to drive the Europe air separation unit market during the forecast period.

The air separation techniques across the world are constantly being re-engineered. Further, the ongoing optimization efforts are aimed at enhancing the overall operating efficiencies and increasing the production capacity, which is possible with a single air separation unit. These efforts aim at reducing the energy consumption and high-capital costs that are associated with the production of oxygen and nitrogen. Active R&D activities reduce the energy requirements of air separation unit in tonnage quantities.

The European Commission are focusing on promoting the growth of the steel industry in the region, by linking the industry with numerous industrial sectors, such as automotive, construction, electronics, and renewable. The growth in these industries is expected to, in turn, propel the demand for industrial gases, thus, driving the demand for air separation unit in Europe during the forecast period. 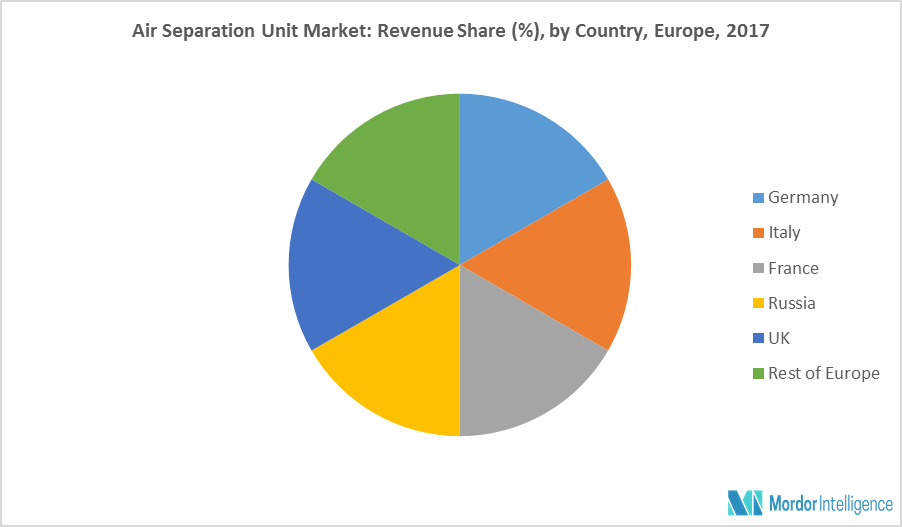 A cryogenic air separation unit is used in medium to large-scale plant to produce nitrogen, oxygen, argon, and other atmospheric gases in either liquid or gaseous form. A cryogenic ASU is the largest process segment of the air separation unit market and expected to witness a significant growth during the forecast period. This growth can be attributed to the low capital and operating expenditure, ease of operation, low maintenance cost, plant and component reliability, process control features, and relatively higher capacity.

Germany is the hub for industrial gases in Europe, with the headquarters of two major international companies, namely Linde and Messer. The country is leading the air separation unit market in the European region. European governments of countries, like Germany and France, have allocated a significant share of funds on infrastructure, ranging from 20% to 35%. The rise in investments for infrastructural development gives a scope to the growth of industrial gases. The growing Russian petrochemical industry is driving the demand for industrial gases. Moreover, in the United Kingdom, this demand is fluctuating every year and growing at an average rate of 2% per annum. The UK market is dominated by BOC/the Linde Group with approximately 50% of market share.