The imbalance in electricity demand and supply is driving the demand for smart solution, like big data. Big data has helped utility companies to track consumption pattern and forecast, to accordingly shift the supply in both space and time, hence, resulting in efficiently utilizing assets. In 2017, the investment in big data and artificial intelligence grew ten-fold. Increasing adoption of smart grid by various government has increased the volume of data, and hence, demand for big data analytics in the power sector.

Smart grid market is maturing. In 2016, utility companies invested more than USD 10 billion to deploy smart meters pushing the total installed number to 700 million. This has resulted in more than 100 petabytes of data per year.  More than half of the deployment was in China, while the rest of the world installed more than 50 million in 2016. Both developing and developed economies, such as China, India, the United States, have introduced their smart grid plan to meet the increasing electricity demand, reduce transmission and distribution loss (especially in Asia-Pacific), and establish two-way communication for managing the consumption trend. As a result, smart grid deployment programs are expected to increase the volume of data. This creates huge opportunity for the market to use the data generated to draw some valuable insights, which can be helpful in reducing the number of power outages, managing supply during peak hours through variable pricing, and others.

Big Data Gaining Momentum among the US Utilities

In the US, companies in the electricity sector have installed 65 million smart meters, covering more than 50% of the total households, in 2015. Deployment reached approximately 70 million smart meters by the end of 2016, and is projected to reach 90 million by 2020. Utilities in the country are increasingly using big data for better decision making. Baltimore Gas & Electric, a gas and electric utility, is making several process and organizational changes in order to support and drive value from a centralized data analytics solution. PG&E, a gas and power company of California, is tackling the big data challenge through its Interval Data Analytics (IDA) significantly reducing the time to access the data and explore questions, which were never before investigated.

Benefits of big data technologies in big wind farms are currently not on the as much as in demand management, energy storage, and distributed generation sectors, but big data technology adoption in the power sector is expected to increase in the coming years. The incremental yield improvement is expected to be in the order of 1-5%. In 2017, the total wind power installation capacity remained above 50 GW, with Europe and Asia-Pacific regions, witnessing record high. Similarly, in India, the wind power capability is expected to increase by four-fold in the next 10-15 years. Similarly other countries are also expected to increase the share of wind energy in their energy mix to decarbonize their economy. As a result, the wind energy sector creates huge opportunity for the big data market during the forecast period. 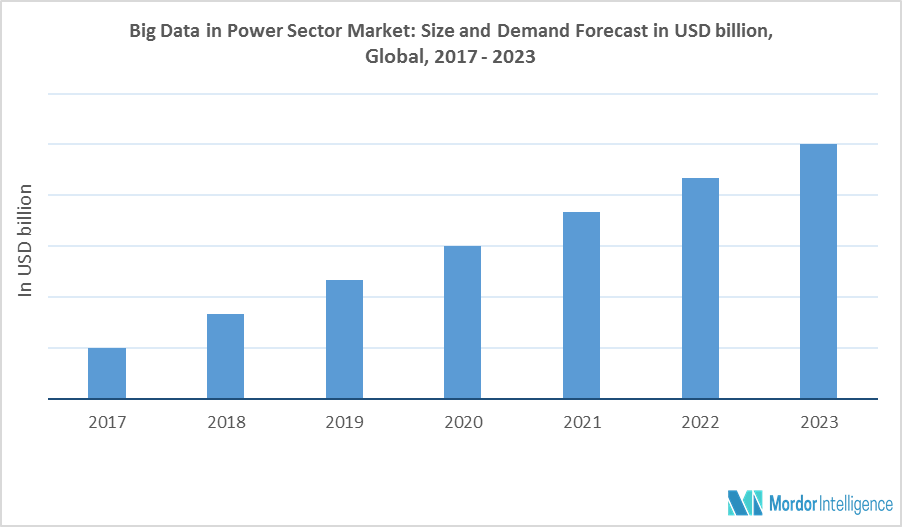 **Subject to availability on public domain