Increasing Demand for Energy to Drive the Market

The Asia-Pacific region is the biggest consumer of oil and gas, and the consumption in the region is increasing at a substantial rate. Major energy consumers in the region are India, China, and Japan. These countries primarily depend on imports to meet the oil & gas requirement. Governments of India and China are encouraging investment in the upstream industry, in order to reduce their dependence on imports. China announced the oil & gas industry reforms in 2017, aimed at liberalizing the market, and in turn, inviting private investments in the sector. The Cabinet Committee on Economic Affairs (CCEA) of India has approved a new shale gas policy, which permits state-owned as well as private companies to explore and produce natural gas in shale plays of the region. This new development is expected to drive the upstream activity in the gas industry, in turn driving the oil & gas EPC market in the country. Increasing investments in the upstream oil & gas sector to meet the energy demands are expected to drive the wireline services market, during the forecast period.

Gas Consumption and Exports to Drive the Market in Australia

During 2010-16, Australia’s oil consumption declined by 25%, while oil production remained stable. Gas production and consumption, on the other hand, has seen significant growth. During 2009-16, the gas production in the country almost doubled. Gas consumption during the same year increased by more than 30%. During 2015-16, Australia’s LNG Exports increased by 49%. In 2016, Australia was the biggest LNG exporter in the Asia-Pacific region. Major importers of the Australian gas are China and Japan. Gas exports are expected to increase mainly due to the growing demand from China. With growing demand, the investment in the upstream gas sector is expected to increase, which, in turn, is expected to drive the market in Australia. 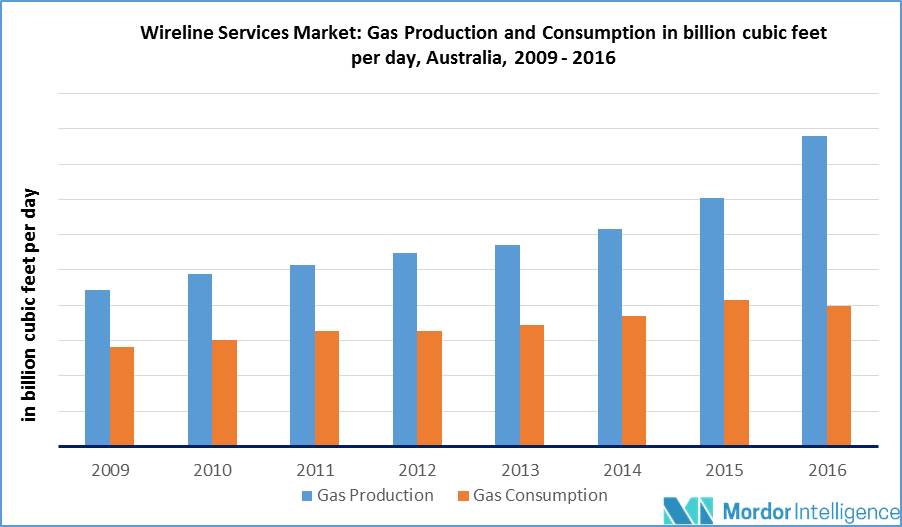