For a long time, Asia-Pacific has been one of the world’s largest oil importing economies. In 2016, oil consumption in Asia-Pacific was around 400% higher than the total oil produced in the region. With a further increase in population, urbanization, and industrialization, the demand for energy is expected to continue to be on the rise during the forecast period. However, to ensure energy security and reduce its oil import bill, countries in Asia-Pacific are expected to invest heavily on boosting their domestic oil & gas production. The Asia-Pacific drilling & completion fluids market was estimated to be valued at USD 3.90 billion in 2016, and is expected to be a regional hotspot for global drilling & completion fluids players. However, factors such as volatile crude oil prices, stringent government regulations to begin new exploration activities, and environmental concerns related to oil-based fluids in exploration activities, are expected to hinder the growth of the Asia-Pacific drilling & completion fluids market during the forecast period. 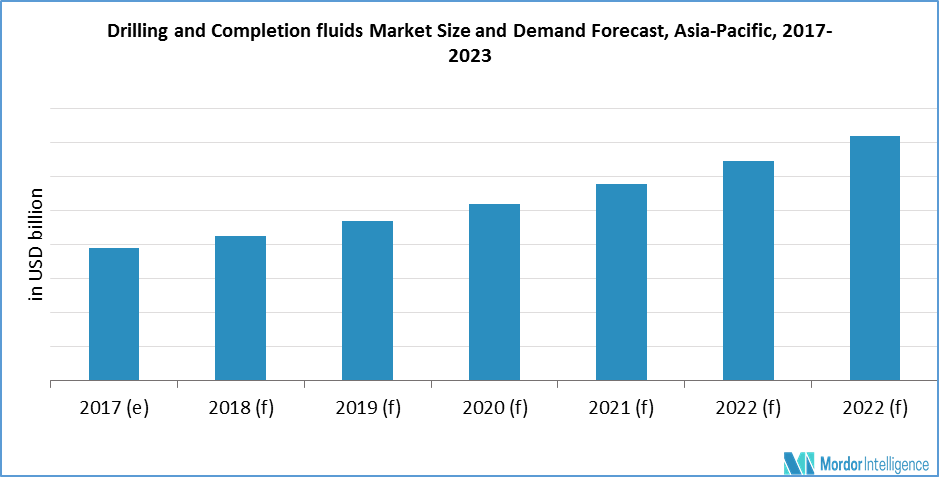 Quest for Reduction in Oil-Import Bill to Drive the Market

Asia-Pacific is estimated to hold approximately 48.4 thousand million barrels of proven oil reserves and 17.5 trillion cubic meters of the proven natural gas reserve, as of 2016. However, for a long time, owing to complex geology, Asia-Pacific has been dependent on other regions to meet its growing energy needs, resulting in an additional pressure on the economy.  There have been some significant steps taken lately, to cut down regional oil dependency and boost regional energy security and autonomy, which is expected to strengthen over time. National players, such as CNOOC, ONGC, and Petronas, among others, are expected to increase their exploration & production (E&P) expenditure during the forecast period. For instance, in May 2017, India’s national oil player, ONGC, announced an investment of INR 215 billion, for the development of India’s deepest gas field discovery. As of 2016, the number of oil & gas wells drilled in the Asia-Pacific region was 17,900, of which 1325 wells were drilled offshore.  Based on the region’s commitment to cut down its oil import bill, the drilling activities are estimated to increase further, into deeper waters in the Asia-Pacific region. As the usage of the drilling & completion fluids depends directly upon the drilling & well completion activities, the regional drilling & completion fluid market is estimated to witness a boost during the forecast period.

India is one of the largest contributors to non-OECD petroleum consumption growth in the world. Its total oil imports rose by around 4.24% year-on-year, to USD 86.45 billion in FY 2017. Despite India’s growing preference for renewables, the Indian government remains committed to reducing its import dependency on oil and gas by 10%, by 2022. The government has allowed foreign direct investment and new hydrocarbon exploration and licensing policy (HELP). Further, the Indian government's decision to raise the natural gas price for undeveloped discoveries in hard-to-access areas, such as undeveloped deepwater, ultra-deepwater, and high temperature-high pressure areas, in addition to recent regulatory improvements, is expected to spur exploration and development activities in the country during the forecast period. As the drilling & completion fluids market depends majorly on exploration & production activities, India offers an optimal growth opportunity for the global drilling & completion fluids players, during the forecast period.

6.4 Threat of Substitute Products and Services

11. Future of the Market

(**Subject to availability on the public domain)