The Asia-Pacific Contact Adhesives market is estimated to register a significant CAGR during the forecast period, 2018 - 2023. China is expected to hold the largest share of the market, owing to the significant growth in footwear leather industry

Dynamic Economic and Social Developments in China and Other Developing Nations

Major factors driving the market growth include increase in number of working females, rise in dual income nuclear families, increasing disposable income and higher per capita expenditure on lifestyle products. In addition, social and cultural factors also influence the market demand. This rise is seen highest in the Asia-Pacific and actively drives the market.  China is one of the largest economies and is a frontrunner in the construction, automotive sector. Moreover, the Indian economy, which has been growing rapidly over the past three decades and this growth, has led to a substantial expansion of India’s middleclass. The growing middleclass population in India and their consumption pattern has drawn Asia-Pacific attention, not only because India is a large market, but also because of the difference it shows compared to other emerging markets. The growth in such emerging market is expected to help the market to grow.

Contact adhesives, fluid and flexible in nature and environment-resistant, are used in shoe manufacturing and leatherwork, which is used in making sports equipment, apparel, accessories, among others. These are used for bonding all parts of shoes, including outsoles, insoles, uppers, among others. The footwear industry in Asia-pacific is experiencing rapid expansion due to demand for new and innovative footwear products, increasing sports activities and increased demand for sports footwear, sports equipment and apparels (made up of leather). The major market in the footwear industry is held by countries, like China and India.

China Set to Dominate the Region

Globally, Asia-Pacific holds the largest share, which accounts for approximately 60% of the total market in 2017. China is the largest market in Asia-Pacific, accounting for more than 50% of the share. The shoe manufacturing industry in China is largest in the world and has been for a long time. In 2015, China produced 13.58 billion pairs of shoes, which is nearly 6 times that of the second in the same ranking, India. Due to the large domestic market, with the presence of the world’s largest population and major exports in all other countries, China’s shoe manufacturing has been on the rise. The increase in minimum wages and overtime pay throughout China, as well as a stronger currency, are expected to help in increased production. This is expected to directly lead to the growth of the demand for contact adhesives in the country. 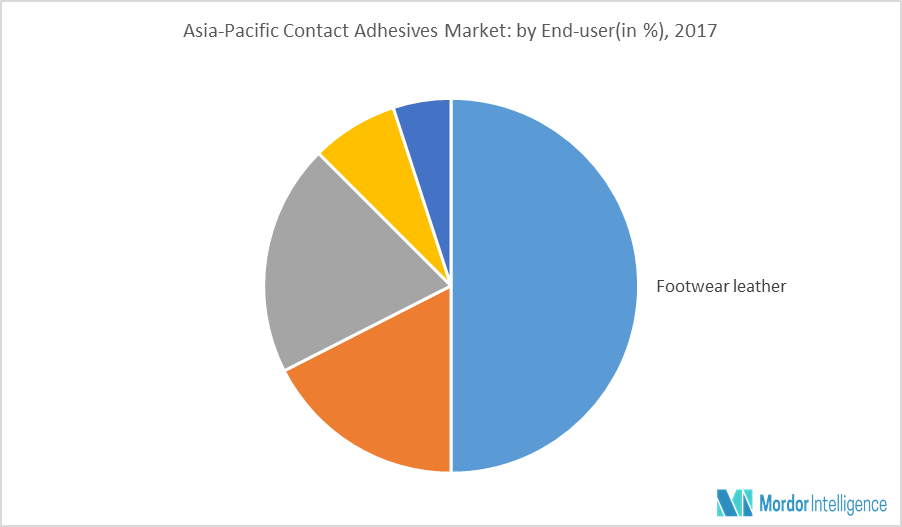